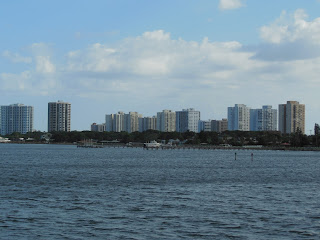 Departed New Smyrna Beach overnight anchorage at Rockhouse Creek at 0800 after a great night of rest.  The location, being near the Ponce De Leon Inlet to the Atlantic had a significant tide flow which we did not realize on anchoring.  Wind started early in the am and by the time for loading the dingy (too much current the night before should have been a sign…) the wind was constant 20 mph plus and current was strong again with incoming tide.  Net result, we got the dingy loaded after some trial and error and the anchor up…. Captain Michele at the wheel did a great job with the dingy and driving the boat into the anchor pickup!  We learned a couple great lessons today… now if we can just remember them! 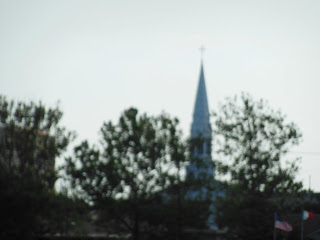 Soon after departure we entered the Halifax River leaving the Indian River we had come to understand behind us.  Despite the warnings of shoaling in this section of the river we stayed mid-channel and adjusted as we could read the water and made the day without kissing the bottom - which is better than I can say about the explorations the evening before in search of the biggest fish that ever swam this part of the river.  (Bottomed the dingy hard in a river side channel – thought about getting out to lift the dingy off the mud – then thought better as it looked like great alligator country!  Don’t know c. those critters but figured I was too tired this late in the day to be wrestling one.  Upped the motor, made a rooster tail and got back to the main channel…. Another lesson learned.) 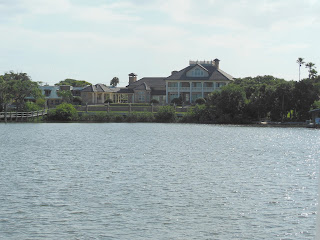 The balance of the day travel went smoothly -  traffic through Dayton Beach was lite as we were relatively early in the day.  Traffic picked up as we moved north and the day warmed up.  Constant wind in the 10 to 25 mph range (thanks to the cold front moving through) likely dampened some boaters’ holiday plans for boating, but most were courteous and we enjoyed seeing the many fine homes and developments along the ICW.   Before we knew it the Matanzas River was on our bow and we passed its inlet to the sea and the river became a series of turns and curves which kept us on our toes at the helm.  We ran all day from the flybridge despite the wind but the cooler temperatures were so welcomed from the previous day’ss heat.  Soon we began to notice the currents of the St Augustine Inlet to the Atlantic and decided to call it a day at St Augustine harbor. 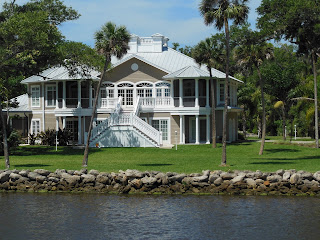 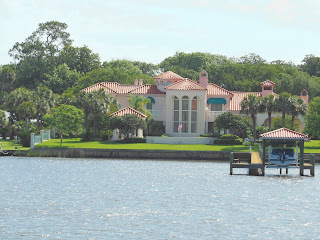 Initially we had decided to pass St Augustine as we had been to this historic city before during our travels.  This is another lesson learned, we found a whole new perspective from the water and we quickly realized what a mistake it would have been to pass by!  Michele called her cousin, Lisa, to see if she and her husband, Lucas, were available for dinner, and Lisa and made reservations for the four of us at one of her favorite restaurants:  La Pentola!   (La Pentola is just about two short blocks north of the historic park – the part across the street from the municipal marina/bridge) .   We had a most enjoyable dinner – the food and the company - at this quite charming, Italian-style courtyard restaurant – if you’re ever in St. Augustine we would recommend this jewel to your dining list!  Lisa and Lucas ordered a vegetarian fettuccine, Ron had a daily special – the Bouillabaisse, and Michele had crab cakes.  All were excellent. 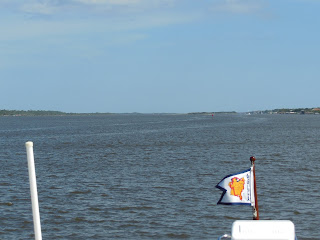 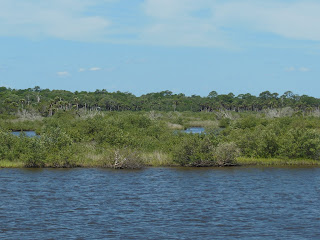 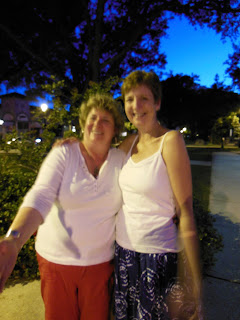 After dinner. Lisa and Lucas gave us a brief walking history lesson of some notable downtown buildings and graciously offered us a ride to a grocery store to replenish needed supplies – mainly bottled water.   A nice walk across the Bridge of Lions to Lisa and Lucas’s car and we were off on a brief tour of ‘their neighborhood’ – St. Augustine Beach.   A short “full moon-light” dingy ride back to the waiting Spirit Journey and we called it a day.  Before turning out the lights we decided we enjoyed the St. Augustine history enough that we would stay Sunday, to do some further exploration. 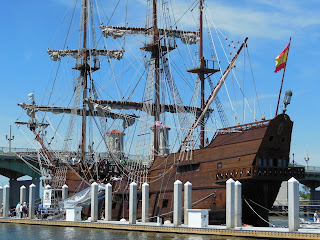 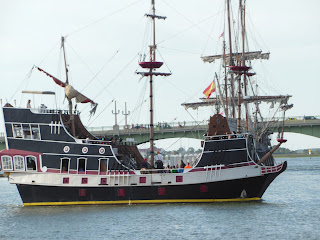 The Tall Ships were in town - couldn't resist another picture... we're going aboard tomorrow! 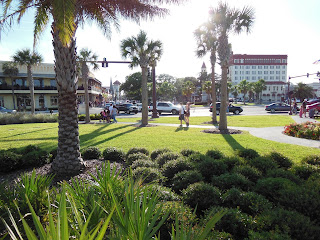